My name is Megan Z Dougherty. What does the Z stand for, you ask? It stands for the fact that someone has already taken my damn name as a URL and an Instagram/Twitter handle, so I added a Z, since that was better than @megandougherty9467. But we can say it adds Zing and piZZaZZ and Zest—or maybe it just stands for Zorgon. In any case, I like it, and though I have published under Megan Dougherty for several years, I have decided to keep the Z henceforth.

I was the Assistant Editor at two local publications from 2004 to 2009, and I became a regular humor columnist at Quilter’s Home magazine in 2009. I also published several feature articles and an uncredited sewing collectibles column there, and occasionally did copyediting and editorial consulting. I then became Creative Director at Generation Q magazine, and continued writing my humor column there along with several other uncredited pieces. Throughout all this, I also maintained my blog, The Bitchy Stitcher, where I mused about life and my crappy sewing, from 2008–2018. It was fun and funny and irreverent and full of f-bombs—and my readers were themselves fun and funny and clearly impervious to my foul mouth. During my time as a quilting humorist, I published two humor collections, Quilting Isn’t Funny and Short, Sharp, and Snippy as well as the greatest quilt-related calendar of all time: The Quilter’s Shirtless Man and Spicy Burrito Calendar.

In 2018, I wrote my last post as The Bitchy Stitcher, after several life changes forced me to take a step back and see that it was time to move on. My goal has always been to become a novelist, and I am currently working on my first romance novel, Serious Social Consequences. 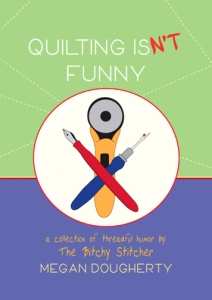